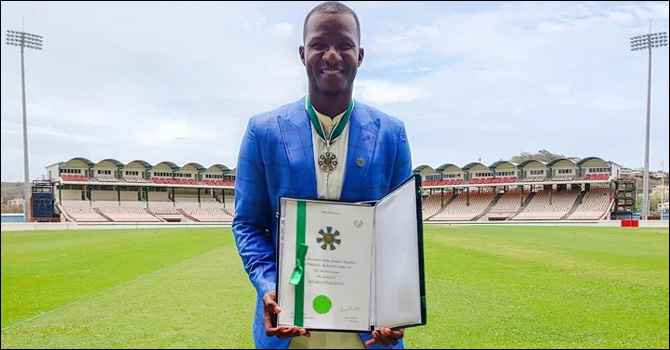 Former West Indies player Darren Sammy led the Pakistan Super League (PSL) team to Peshawar Zalmi’s first and only title win. He has been with the team since then. Sammy’s role is also essential in the spread of cricket in Pakistan. Pakistan has honored him in gratitude for his contribution. The Caribbean captain Darren Sammy, who won the World Cup, has been awarded the ‘Sitara-e-Pakistan’ award.

Sammy’s name was announced by the President of Pakistan in August 2021 for this award. Arif Alvi. The testimonial said that Sammy was awarded the title of ‘Sitara-e-Pakistan’ for his contribution to the revival of international cricket in Pakistan.

Sammy was nominated for the award in 2021, but it was handed over to him this year. The award was presented to him at a ceremony in his hometown of St. Lucia. Sammy also shared with his fans the moments before and after he went to collect the prize.

“Cricket has taken me all over the world,” Sammy said after receiving the award. I saw some amazing places and played there. Pakistan is definitely one of these places. It’s a place that feels like my own home. ‘

Sammy further wrote in the social media Instagram post, “It is a great honor to receive this prestigious award (Sitara-e-Pakistan) from the Government and people of Pakistan. Thank you all. ‘

Meanwhile, Javed Afridi, owner of Peshawar Zalmi, also congratulated Sammy on receiving the prestigious award. He highlighted Sammy’s contribution in a post on Twitter, saying that his contribution to the revival of Pakistan cricket would be written in the golden language.

Javed writes, ‘Congratulations Darren Sammy brother. You deserve this award. Your contribution to Pakistan cricket will be written in golden letters. You will remain in our hearts. ‘