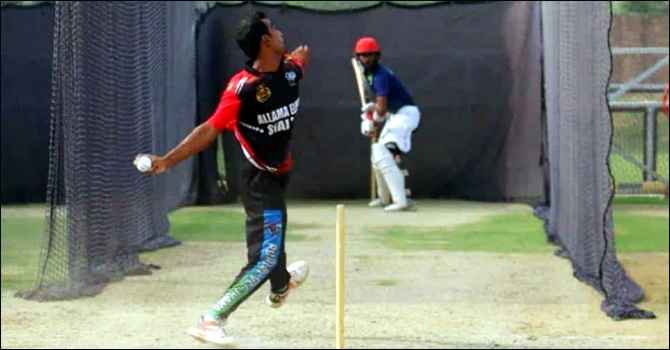 Trying to imitate the bowling action of all the popular fast bowlers in the world is nothing new. Some even mastered it again. This time Lahore Qalandars have found a new fast bowler Tayyab Abbas having the same bowling action as the legendary Sri Lankan fast bowler Lasith Malinga.

The Pakistan Super League (PSL) franchise Lahore Qalandars and English county club Yorkshire have embarked on the Player Development Program (PDP) with the aim of finding talent. They found this boy of special talent during the camp of this program.

The boy’s name is Tayyab Abbas. Legendary Sri Lankan bowler Lasith Malinga has surprised everyone with his bowling ability. In disbelief, his bowling style has left the camp’s bowling coaches Akib Javed, Darren Goff, and Samin Rana, owner of the Lahore Qalandars.

Tayyab has no formal training. Nevertheless, his ability to bowl at a speed of 86 miles per hour in ‘slinging’ action has come as a complete surprise to Darren Goff, a former England fast bowler and managing director of Yorkshire. It was as if he could not believe it.

Surprised, Gough said, “He bowled at 86 miles per hour between the coaches without any spikes. He still doesn’t know how to catch the ball. His body does not have a balance after following through. He also throws the ball 6 miles from the other end. Wow! ‘

Former Pakistan fast bowler and PSL title-winning Lahore head coach Akib Javed also said he was impressed with Tayyab’s talent. Akib thinks that Tayyab could be a real asset for the Lahore Qalandars in the future.

Tayyab came from Zhang, a remote area of ​​Pakistan. He works as a welder. Her father owns a small bakery. Tayyab said, ‘My dream is to play for Lahore Qalandars. I have completed my first step in the trial, I want to go the rest of the way.