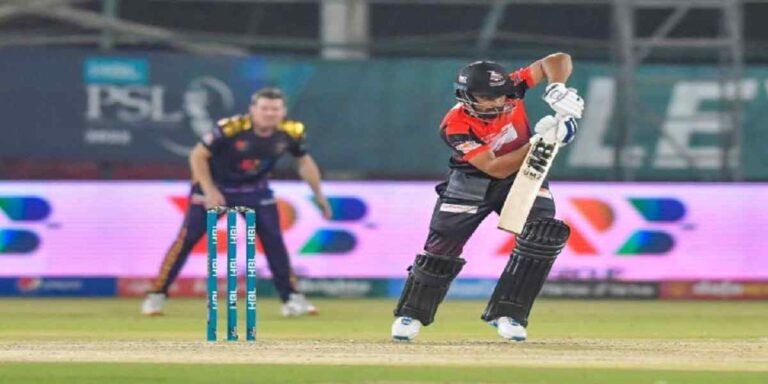 Most Runs in a Single PSL Edition

Fakhar Zaman breaks Babar Azam’s record for the most runs in a single PSL season. Fakhar Zaman, the opener for Lahore Qalandars, became the first player to break Karachi Kings captain Babar Azam’s single-season record for most runs scored and most half-centuries scored in the history of the Pakistan Super League (PSL) on Wednesday.

Currently, Fakhar is the tournament’s best run-scorer with 584 runs, surpassing Babar’s previous record of 554 runs. In the first qualifier against Multan Sultans, he scored the 34th run in his inning, which included 63 runs off 45 balls, to reach the milestone. In the end, Qalandars lost the match by 28 runs.

He has also become the only batsman in tournament history to register eight half-centuries in a single year. A record of seven half-centuries in one edition was previously held by Babar. Multan’s captain Mohammad Rizwan has 532 runs and seven half-centuries to his credit, the most recent of which came against Qalandars in the playoffs, when he hit 53 off 51 balls for Multans. He has the ability to break Fakhar’s record. The winner of the first eliminator will meet the winner of the second eliminator on February 25.

Fakhar Zaman Becomes Highest Run Scorer in a Single Pakistan Super League – PSL Season. He made history against Quetta Gladiators in the 15th edition of the PSL, scoring an incredible 70 off 45 balls. To get to this point, the left-hander has three half-centuries and a tonne to his name.

Pakistan Super League (PSL) has reached its height, with a number of records broken and some magnificent batting/bowling displays to be witnessed. Fakhar has now amassed the most runs (356 in 5 innings) of any player. For Qalandars, Umar Akmal had previously held the record, scoring 335 runs in the first PSL season.