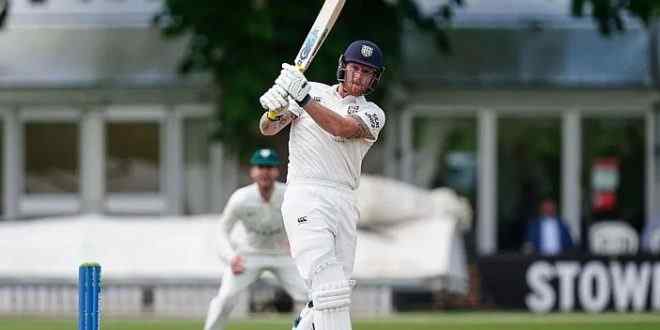 Ben Stokes scored 34 runs in an Over in Test Match

England’s new Test captain Ben Stokes has withdrawn from the IPL to focus on red-ball Test cricket. This time he made red ball cricket the mercurial cricket of IPL. After about a month and a half, the all-rounder, one of the best all-rounders of the time, returned to the field with the bat. Ben Stokes scored a total of 34 runs, including five sixes, in one over, playing for Durham in the county test championship match against Worcestershire.

Durham won the toss and elected to bat. Today (Friday) in the first session of the second day of the match, left-arm spinner Josh Baker has been attacked by Stokes. He hit sixes in the first five balls of the 117th over, the last ball went for four.

Baker’s first ball was straight to six by Stokes. The address of the next ball is across the mid-wicket boundary, the third ball with a long-off boundary, and the fourth six hit in the same place. Stokes hit a six off the fifth ball with a long on and reached the century with just 64 balls.