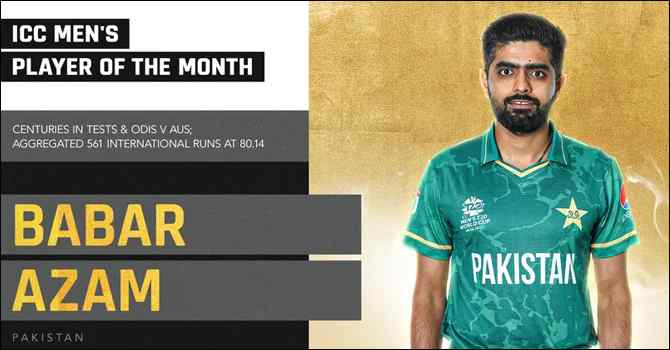 Pakistan captain Babar Azam has been named the ICC Player of the Month for March 2022. He is followed by Craig Brathwaite of the West Indies and Pat Cummins of Australia. Australian batsman Rachel Haynes has been selected for the award in the women’s category.

Babar Azam was great with the bat throughout the march. He was selected for his stunning 198-run innings in the second Test against Australia in Karachi. Babar Azam is the only player to have been nominated for the award twice. He had earlier won the award in April 2021.

Babar finished the series as the third-highest run-getter after Usman Khawaja and Abdullah Shafiq in the recently concluded Benaud-Qadir Trophy. He scored 390 runs in 5 innings at an average of 6. Which includes two half-centuries and a century. Babar also maintained his form in the ODI series.

Darren Ganga, a member of the voting panel, said, “Babar Azam did not win this award only because of his remarkable run in Pakistan vs Australia tour. He has been successful in all formats from Test series to ODIs with the bat.

The former West Indies player added: “After 24 years, as a Pakistan captain and batsman, he has been able to live up to expectations. That is a huge achievement. Meanwhile, Rachel Haynes, the best woman of the month, played a key role in helping Australia win its seventh Women’s World Cup title. He lost to England spinner Sophie Ecclestone and South African opener Laura Olward for the award.